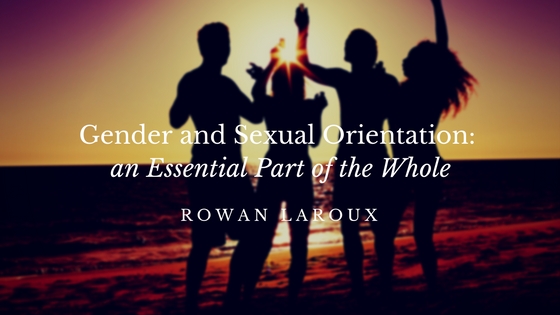 Everyone goes about creating characters in their own fashion. You have the writers who develop their characters along with the story, and those who create intimately detailed character sheets before the first word is ever written. Regardless of how you build them up, you have these awesome characters and you want to add all those juicy tidbits into the text of your story. You might ask yourself: how can I make my readers know that my character likes to drink her tea at exactly 2:35 PM every other Thursday? How do I talk about the heavy political climate of a trans-galactic war? On top of all that, how do I create and address my character’s orientation in my story?

You will have to figure out the first two but I’m here to talk about the third. Characters in stories are often just as complex as people in real life: they have histories, they have culture, and they have thoughts and aspirations. All of these combine together to make them who they are. So when you throw gender and sexual orientation in there, it adds an additional facet to the diamond you are slowly chiseling and polishing.

Whenever I am creating a character I usually sit down and have a good think about the importance of various aspects of their identity. Since I generally have characters who identify as LGBTQ+ in my writing, orientation is one that I spend a long time on. There are quite a few aspects to a character’s orientation (be it gender or sexuality) that are important to think about. I tend to take the behavioral/psychological/social approach to make it less confusing and convoluted. In other words, I ask myself how my character’s particular flavor of LGBTQ+ influences their behavior, how they think/feel, and how they perceive and are perceived by others and society. I also go a step further and explore how much or little that character is impacted by their orientation. For some characters, being gay or genderqueer might be the most defining and important aspect of their identity and the driving force of their narrative. For others it might be a very small part of who they are and play a minimal role in their story.

In my experience, one of the important things to keep in mind about writing a character’s orientation is to integrate it with the rest of their identity. Just like real life people, characters are much more than a collection of checked identity boxes. Each identity interacts with the others, forming a complex web of relationships that guide the character’s thoughts and actions. Take a look at all of the individual identities that they have. How are each of these impacted (or not impacted) by the character’s sexual/gender orientation? How does a character being a lesbian interact with her identity as a black woman? How does a character who is trans navigate being a ship captain in the Atlantic? These are complex relationships that may take a lot of research and exploration on your part. It is this, in part, that helps in reducing the chances of tokenizing your character. If you integrate multiple aspects of identity in a realistic way without relying heavily on stereotypes, you are well on your way to having a sweet ass LGBTQ+ character. After all, your character is much more than a gay man, just as he is much more than hazel eyes, a gravely voice, and skin the color of a deep sunset.

So now you have a nice well-rounded LGBTQ+ character. At this point I usually begin exploring just where I can sneak these little tidbits of identity into the text of my story. I think about what interactions could occur, what conflict might arise, and what dialogue I could integrate that would address a character’s orientation. Sometimes it is a single line of dialogue, other times it becomes a major sub-plot that flows through the whole story. It helps to decide how much time and space you dedicate to exploring your character’s identity on the page. In this way you can address the character’s orientation in a way that fits with the flow of your story. If it makes sense to have a romantic sub-plot for your polyamorous trans lady, then by all means give her lovers that will make the stars rearrange in the sky. If it makes more sense for her to go ass-kicking some trolls to save the kingdom, then that works too. Do whatever feels right to you, whatever fits with the flow of your story and your character.

An important thought to keep in mind is to be respectful to whatever orientation(s) you choose for your character. If it would upset you if someone wrote something hurtful about an orientation that you identify as, keep that in mind as you are writing. As with anything in the world of writing, research is your friend.

If you are still wondering how to integrate a character’s orientation with the rest of their identity and story, sometimes it helps to look at your own identities and how they have influenced your life. Just as you are unique, so too are your characters.